What is a General Plan?

The Ventura County 2040 General Plan is a long-range plan that guides decision-making, establishes rules and standards for development and county improvements, and helps to inform residents, developers, and decision-makers. It reflects the County’s vision for the future, provides direction through the year 2040 on growth and development, and is an expression of the quality of life in Ventura County.
Get to know more about the 2040 General Plan by clicking on your area of interest:

Purpose of the 2040 General Plan

Vision and Guiding Principles of the 2040 General Plan

Readers’ Guide for the 2040 General Plan

Milestones for the 2040 General Plan

Community Engagement for the 2040 General Plan

Why update the General Plan?

The County’s current General Plan expires in 2020 and it has not been comprehensively updated since 1988. Since that time, there have been many important changes to state law that dictate what issues must be included in a general plan. For example, state law now requires that we address climate change and the design of streets to better accommodate pedestrians and bicycles.
Most general plans are organized by topics or “elements.” State law requires that every General Plan contain seven elements: Land Use, Circulation, Housing, Conservation, Open Space, Noise, and Safety. State law allows every jurisdiction to decide how to organize its general plan as long as the required elements are included.

In addition to the four topic areas, the County’s existing General Plan includes a document called the “Ventura County Goals, Policies, and Programs.” As the name implies, it includes the goals, policies, and programs for all topic areas.

As a part of the General Plan Update, the existing elements may be reorganized and the County will develop three additional elements to address issues related to agriculture, economic development, and water. The General Plan Update will also incorporate the topics of health and climate change.

State law also allows jurisdictions to create plans that apply to specific geographic areas. These are called Area Plans, and the County has several of them. All Area Plans will be evaluated for consistency with the updated General Plan, but the project does not include a concurrent revision of the Area Plans. The County of Ventura’s Area Plans include: 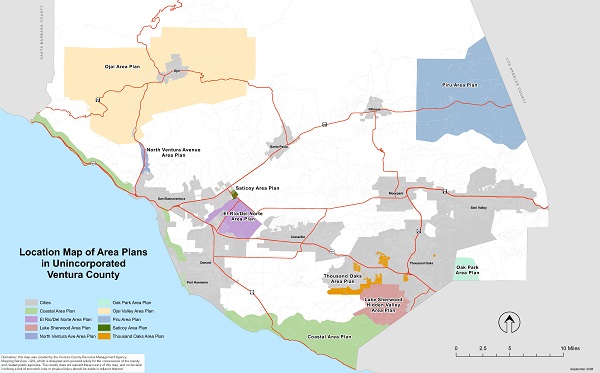 The map to the right displays the County's Area Plans - click on the map to see an enlarged image.

The County of Ventura’s Area Plans can be accessed online at
vcrma.org/area-plans